Leroy Van Dyke on His Two Career-Defining Hits, ‘The Auctioneer’ and ‘Walk On By’ 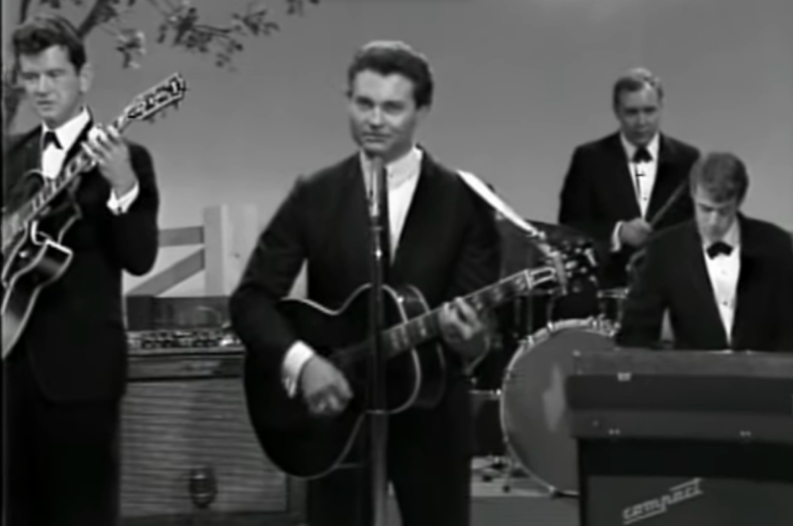 Though Leroy Van Dyke‘s defining hits “The Auctioneer” (1956) and “Walk On By” (1961) came just five years apart, they shook up the charts at two very different times in country music history.

“The Auctioneer,” a song Van Dyke co-wrote with Buddy Black, reflected the auctioneering experiences of Van Dyke and his second cousin, Ray Sims. It became a top 10 country hit and cracked the pop chart’s top 20.

“He was probably the best cattle auctioneer that ever walked,” Van Dyke says of Sims. “He was eight years older than I am. The only thing that’s not true (in the song) is it says there was a boy in Arkansas. He was not from Arkansas, but nothing rhymes with Missouri.”

Van Dyke first dreamed up the song while serving his country during the Korean War. Its live debut in front of Van Dyke’s fellow troops doubled as the only time a country singer opened for Marilyn Monroe.

“The Auctioneer” made Van Dyke a star, first of his home state of Missouri’s Ozark Jubilee and later of Nashville’s Grand Ole Opry.

The country charts from 1961 show a healthy mix of ’50s stars (Jimmy Dean, Kitty Wells) and signs of things to come (from George Jones‘ second No. 1 to Faron Young’s success with “Hello Walls,” an instant classic penned by newcomer Willie Nelson). The more pop-oriented Nashville sound, which elevated such multi-talented vocalists and storytellers as Patsy Cline and Jim Reeves, also impacted what’s popular and benefitted Van Dyke’s career in an unprecedented way.

“Walk On By,” a cheating song written by Kendall Hayes and Gary Walker, stayed atop the country charts for 19 weeks, charted for a total of 42 weeks and cracked the pop charts’ Top 5 en route to over 1.5 million copies sold. Those numbers remained untouchable for 50-plus years, eclipsed in recent years by Sam Hunt‘s “Body Like a Back Road” (a No. 1 country hit for 34 straight weeks in 2017) and Florida Georgia Line and Bebe Rexha‘s “Meant to Be” (a 50 week No. 1 on the country charts in 2017 and 2018).

“I knew it was a good record when we walked out of the studio that night, but I had no idea that it’d do what it did,” Van Dyke admits while explaining that it’s hard to predict any chart hit, much less one that breaks records.

His label home also had no clue it’d been gift-wrapped a smash hit.

“It was a slow starter because Mercury Records’ promotion department didn’t think it was a hit,” Van Dyke adds. “They were pushing the wrong side, and finally we got them turned around and on the right side.”

Mercury wasn’t the only label unaware of how much money it and Van Dyke could make with a well-timed, pop-accessible single.

“Between my first record on Dot and my first record on Mercury, I had a long, dry spell because they really didn’t know what to do with me… Dot Records didn’t, so I asked for a release,” Van Dyke says. “I tried to look for a new record (deal), and I had a friend that was in the booking business in California. He was a booking agent, and he called Ken Nelson of Capitol Records, who had a lot of the big names in country music. He asked Ken Nelson if we could come have lunch with him and talk to him about the possibility on doing a record on Leroy Van Dyke. You know what Ken Nelson said? He said, ‘I couldn’t be less interested,’ and he slammed up the phone. About three years later, I cut the biggest record of all time. How do you like me now?”

Van Dyke vividly remembers the when, where and how of learning that he’d notched the biggest hit of its time.

“I was playing a show at a casino up in South Dakota, and we were up there for two or three days,” Van Dyke recalls. “My phone rang about 7:00 in the morning. Of course you work late at a casino, and I thought, ‘Who’s calling me at 7:00 in the morning?’ It was my wife calling, and I thought, ‘Well, it must be important or else she wouldn’t be calling me.’ She said, ‘Guess who has the No. 1 classic country record in the world since they’ve been keeping records?’ I said, ‘I don’t know. I have no clue.’ She said, ‘Walk On By.’ I couldn’t talk for a little bit because I wondered how in the world this could be. I’m in competition with people like Ray Price and Marty Robbins and Faron Young and all of those guys.”

Though Van Dyke has yet to score a second No. 1, he excelled in the ’60s as a handsome, well-rounded entertainer. As TV became even more of a factor in the spread of country music, he hosted his own syndicated series, The Leroy Van Dyke Show. He also became one of the first country music performers with his own Las Vegas stage show.