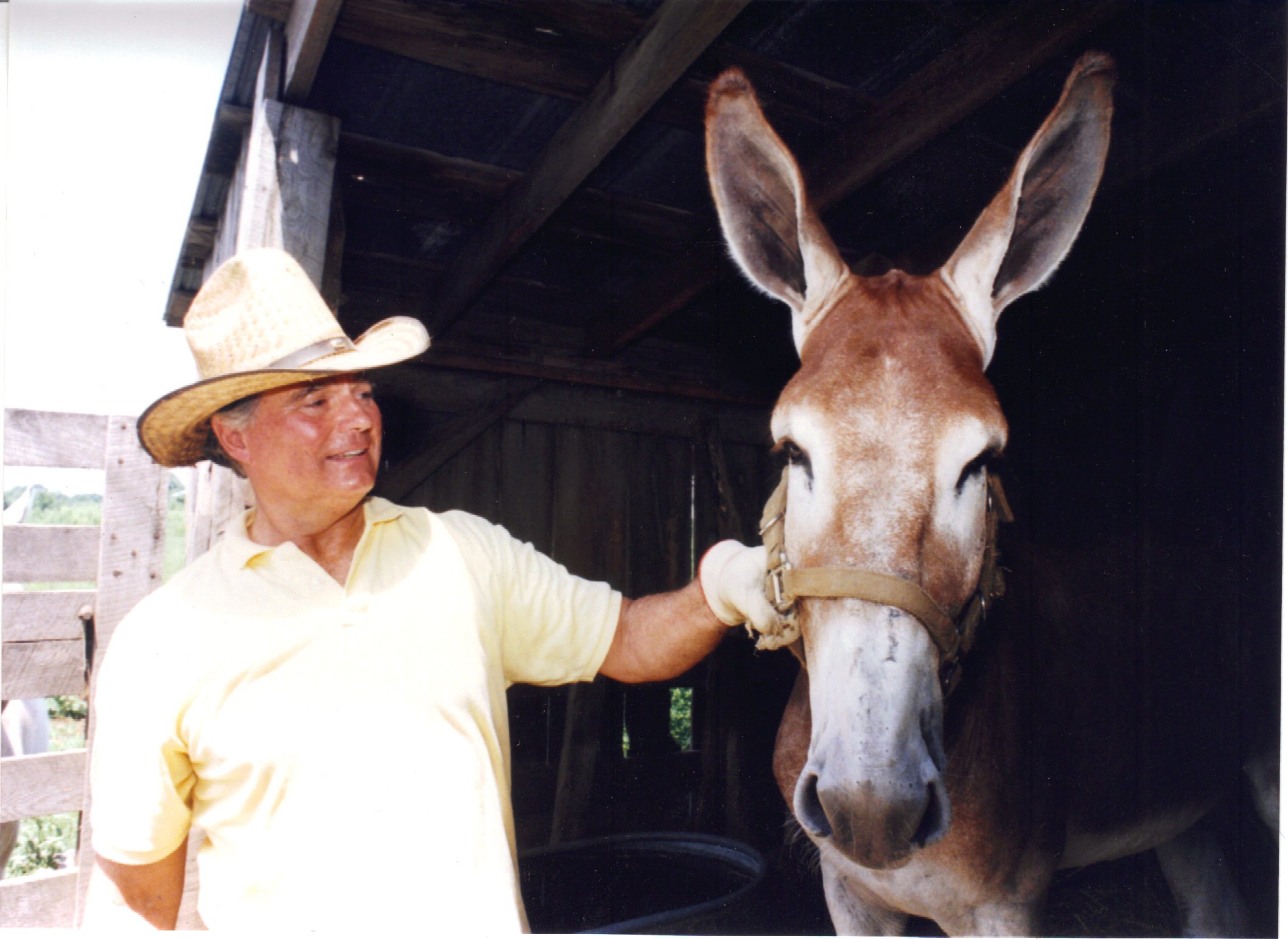 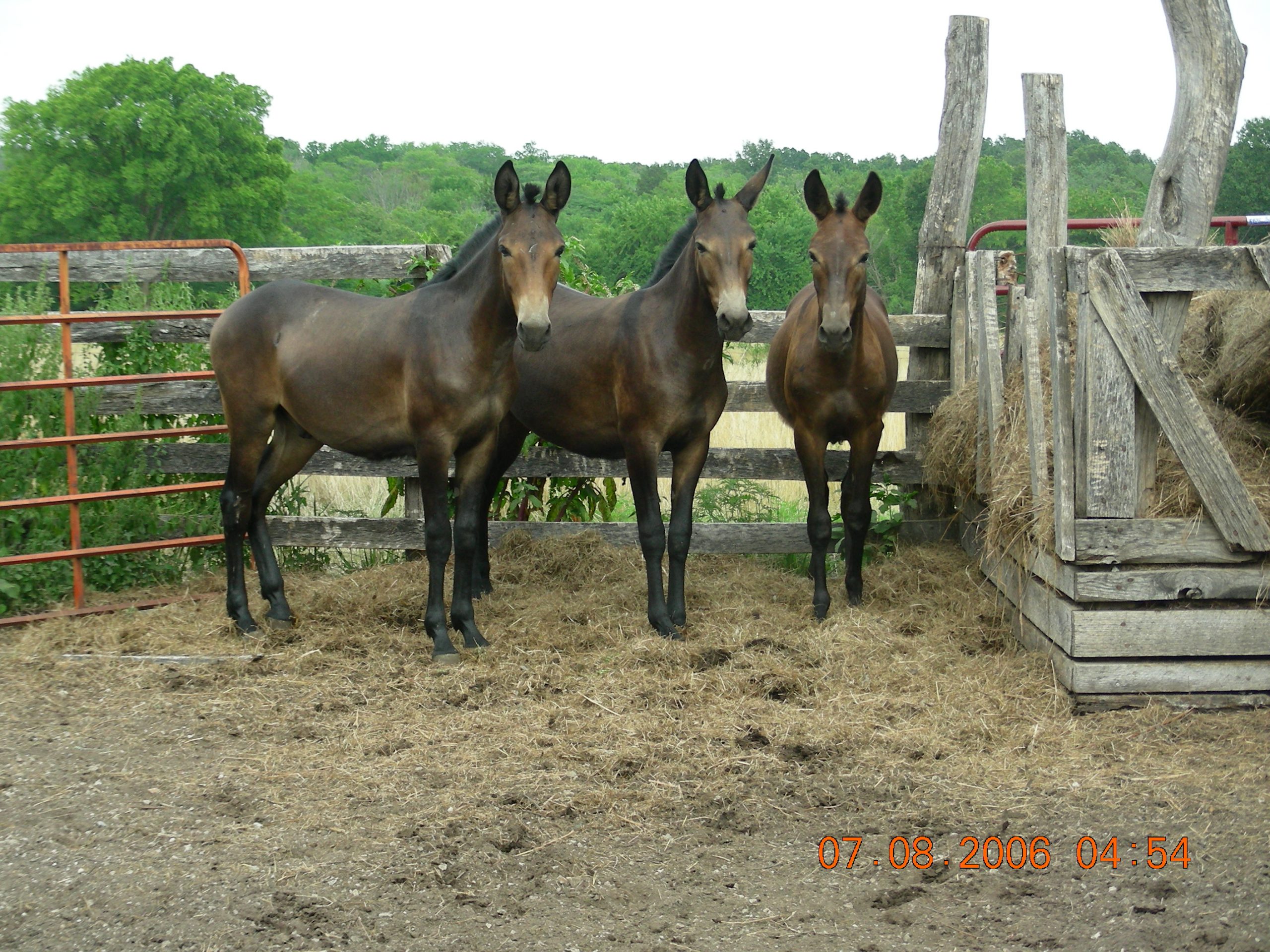 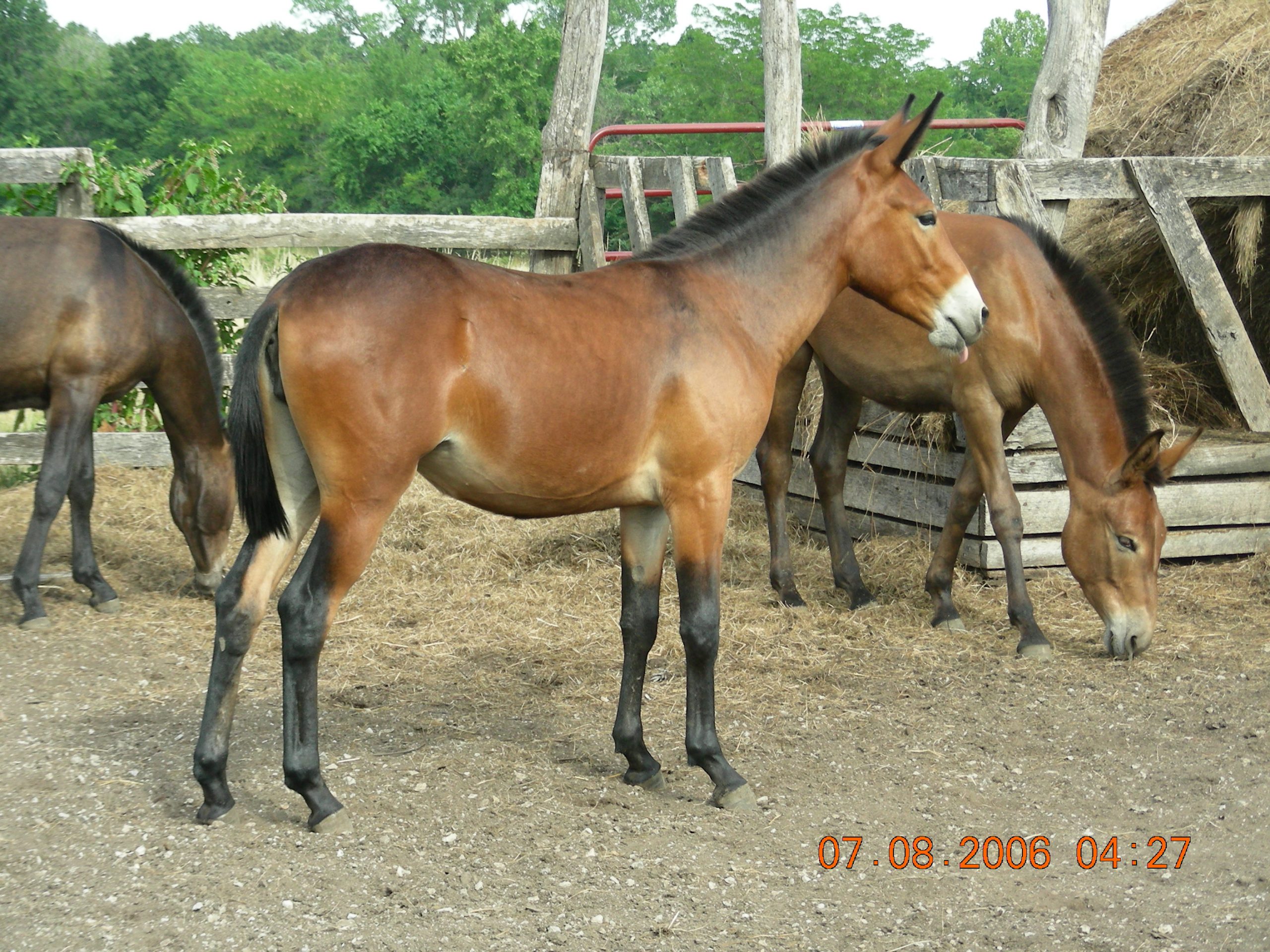 THE ARABIAN MULE
. . . as experienced by Leroy, Gladys and Ben Van Dyke There is no way I can remember far enough back to recall life without mules. Quite simply, during my childhood and youth, mules were an integral part of rural life in central Missouri.

All of our hay mowing and raking, all of our corn planting, much of our row crop cultivating and all of our winter feeding chores was accomplished using the power of the mule. I recall one year when we planted 650 acres of corn, using two two-row planters and two teams of mules.

Since we had no electricity on the farm at that time, not the least of the value of the mule was the fact that we could pull cars, trucks or tractors to start them in cold weather or in the event of battery failure.

My brothers and sisters and I grew up as an important portion of the labor force on our parents’ three-thousand- acre livestock farming operation, as well as a moderate- sized trucking firm.

My father raised cattle, hogs, sheep, horses and a number of mules. In addition, in the fall of the year, he would buy weanling mules from the neighbors, grow them out, then either break them to work and sell them, or sell them unbroken. My father always said, “Don’t get married to your mules; the time to sell them is when you have someone who wants to buy ’em and has the money to pay for ’em!”

In addition, he was part of the interstate trade in mules, hauling them by the semi-trailer load to destinations throughout the Southeast and South from West Virginia to Louisiana and points between.

After entering the entertainment business, I had very little contact with mules until we moved our entertainment base of operation from Nashville to the family farm in central Missouri, which we purchased a few years after my parents’ passing.

While living in Tennessee, we had accumulated a herd of registered Arabians, and with our return to abundant grass and hay lands, plenty of space (1,000 acres), and with the recently acquired knowledge that the light-legged riding mule’s popularity was on the upswing, we got with the program!

In 1991, we raised three mules sired by a leased mammoth jack, then purchased our own sorrel roan mammoth, standing 15 hands high. From 1991 through 1998, we produced 58 head of mules (from seven to nine each year), and have sold them into several states. We maintain a good inventory in order to give any buyers a good selection. We currently have ten brood mares and three jacks, all mammoth.

We’ve been asked by many people, including experienced mule men, about the characteristics of the Arabian mule. First of all, a mule is a mule is a mule! All mules have some of the same characteristics, but vary greatly in some attributes and attitudes because of individual genetics and environment. Environment, or how the mule is treated or mistreated is a most important factor with any mule. I’ll not go into that subject to any depth . . . professional trainers have already covered that subject in many writings and videos.

As for genetics, I’ll not dwell on any scientific dissertation . . . I’ll leave that to some of the professors at my alma mater at the University of Missouri.

What I have to say about the Arabian mule can be summarized in a few paragraphs. Mules from Arabian mares have the distinct advantage of centuries of genetic purity, as well as breeding for performance, style and beauty. The life of the Arab on the desert, in many instances, depended upon the stamina, athletic ability and soundness of his mount.

Our observation of the Arabian mule indicates that they are extremely athletic, quick, agile and sure in all of their movements. They have good hoof and bone quality, and, in general, appear to be better balanced, end to end, than mules from nondescript females.

There’s no doubt about the fact that the Arabian mule has more style and grace than the average mule. Most have only slightly smaller ears than normal, but the overall size of the head is somewhat smaller, with no Roman-nosed individuals such as you would find in mules with a non-Arabian background. Most even have a faint indication of the Arabian “dish” face, although not at all pronounced.

From the standpoint of temperament, we are extremely pleased with our observations of the Arab cross. With very little training or attention, our mules are curious and affectionate, usually crowding around and vying for attention as we enter the lot at feeding time. However, as with all groups, some are more gentle than others.

Our mares are typically Arabian in size, ranging from 14 1/2 hands to 15 1/2 hands. Likewise, most of our mules will fall into that size range, most around 15 hands, but some reaching over 16 hands.

We have, to date, had absolutely no foaling problems or complications and no respiratory problems. I attribute this to a couple of factors: 1) the inherent vigor of the Arab hybrid mule; and 2) diet and method of handling the herd.

Our mares run on native prairie grass a majority of the time and are never allowed to graze fescue. This statement possibly means nothing to anyone outside the Midwest or South, but fescue is extremely harmful to a breeding herd, equine or bovine, and regarding such usage should, in my opinion, be considered a noxious weed.

Our mares never see the inside of a barn, regardless of the weather, except for a period of approximately a week immediately following foaling. For this one-week period we keep them in well-bedded, well-ventilated stalls for observation and “imprinting.”

Following the breeding season, our mare/foal pairs are turned out on grass and fed a free choice protein supplement or a grain mix of about seven pounds per day until weaning at about five months. At that time, the mares are turned out on prairie grass pasture, with good windbreak tree cover along creeks and draws, and usually are not fed any hay until January. A mineral mix is kept before them, free choice, at all times.

About sixty days before foaling, we place tubs of protein supplement in the pastures, then about thirty days before foaling we feed about seven pounds of a grain/protein/Calf Manna mix to each mare. These procedures have worked well for us, and all of our baby mules have been healthy and vigorous. One mule, foaled in 1993, actually pawed the ground and tried to get up, even before its hips and hind legs had emerged from its mama!

What we’re doing, with regard to nutrition and handling must be all right, since our conception rate is high, and live-foal percentage ranges from seventy-five to one hundred percent, far above the national average. We have not lost a foal carried to term, but occasionally some fetuses absorb during the winter months. I believe our good percentages are partially attributable to the natural fecundity of the Arabian mare, coupled with the natural prairie grass diet.

Finally, but not by any means least, I feel that the Arabian mule probably has a somewhat higher I.Q. level than most. They are always alert, always curious, always have that “what’re-we-gonna-do-next?” look in their eyes. To me, that is a most important consideration when selecting a mule for any use or application. In summary, we (my wife, Gladys, and son, Ben, and I) believe, without a doubt, that as the demand for light-legged mules continues to grow, there will be an increased demand for the Arabian mule, and they will do their job quite well!